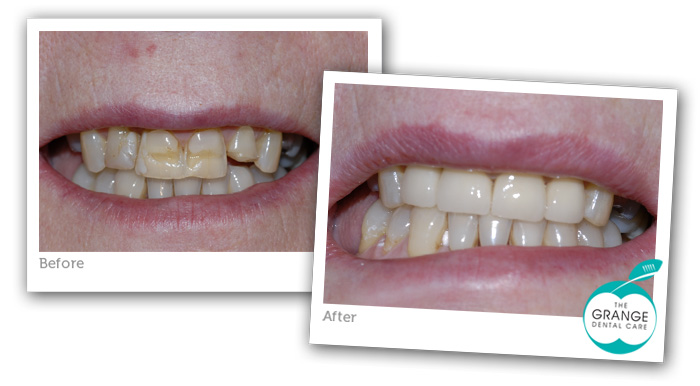 ‘Unbelievable what Paul was able to do. I was attending dentists where I lived for years and they never explained what was happening to my teeth and never suggested a solution.’

(Before) This lady, who lived more than 3 hours away, contacted us initially by telephone after being recommended by a neighbour who had had treatment carried out by us. She did not like her front teeth- they were too yellow. Her dentist had tried filling the teeth but the fillings kept falling out.

On examination we discovered that among other things the lady had been brushing her teeth too vigourously over a long time with an abrasive tooth paste causing harm to her teeth.

(After) Our hygienist gave advice on brushing and diet initially. We then made some non metal crowns for her front 4 teeth. The treatment was carried out over 2 months